Rand McNally TND 720 has an average rating of 3 out of 5 based on 6 user reviews. 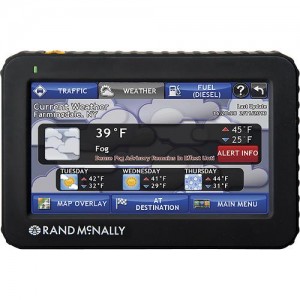 With 158 years in the business of making maps and atlases, Rand McNally has garnered a considerable reputation for providing the public with clear, concise, and accurate information concerning all things of a geographical nature. The company has taken its expertise into the age of digital information by developing its own line of GPS navigational aides. With heavy input from actual experienced truck drivers, devices like the Rand McNally IntelliRoute TND 720 have been assembled to make delivering cargo an easier chore than ever before.

At just a pound, the TND 720 can be safely secured to any truck window with its sturdy suction cup that includes an adjustable arm. The device is only 7/8th of an inch thick yet sports an extra-wide 7-inch brightly lit touchscreen faced with a tough glass cover designed to withstand the rough conditions of a truck cab. The device comes with a power cable that plugs in the back. Just to ensure steady power, it also contains a lithium-ion battery that holds an hour’s worth of juice. To keep it charged, both a standard home recharging cable and a vehicle recharger that plugs into the cigarette lighter are supplied.

With a big display, it’s simple enough to select the desired icon on the touchscreen and see large, sharp maps and animations when needed. The TND 720 also provides audio instructions through its speaker located on the back, so the driver can keep their hands on the wheel and eyes on the traffic. For times when background noise may be too much, the device possesses a rear port to attach an external speaker for increased volume. There’s also a connection port for an external rear-facing camera with the sizable screen allowing the driver an unobstructed view once it’s activated with a quick press of the on-screen icon. You can get a great deal on Rand McNally TND 720 here.

Since Rand McNally is synonymous with maps, it’s no surprise that a key feature of the TND 720 is a lifetime supply of free maps. To stay current with any transportation changes, the maps are updated on an annual basis. In Junction View mode, the screen provides a detailed three-dimensional animation of any approaching, tricky lane-changing situations that includes a guiding arrow so the driver only has to align their own position to match the image on the screen. Another popular feature of the TND 720 is its WiFi connectivity. The GPS device can tap into any available WiFi signal. This can include utilizing either an Apple or Android smartphone as a portable hotspot. While on the web, the driver can link to Rand McNally’s own free website that provides information on weather conditions, fuel prices, and trucking-related services like truck stop and restaurant locations. The operator has the options of viewing the information in text form or as overlays on Rand McNally maps. An expanded, paid version of the website also offers up-to-the-minute reports of traffic conditions anywhere in the country.

As a computer, the TND 720 handles things like fuel purchases, addresses, and times can be stored and used to determine fuel economy, route feasibility, and distance. The Virtual Dashboard rapidly displays these and other important information like mile markers, construction alerts, or the driver’s own entered warnings. It’s also possible to contrast existing routes to potential replacement routes in graphical form on one of the numerous maps. In addition, two separate accounts for time and miles can be stored for team situations.

This unit was an upgrade from PC Miller. The Rand McNally is easy to use and it has many features that PC Miller doesn’t. The 7inch screen is great and very readable even when it’s sunny. The unit is very sturdy, doesn’t shake and I can hear it clearly. This is the only GPS that is not car GPS rebranded as truck GPS, Rand McNally was made specifically for trucks.

I wasn’t really sold on this model just form what I had read, but a couple of my friends started using them and seemed pleased with the results. I decided to give it a chance and as of the time of this review it is performing well. It does everything Rand McNally says it will. I went with a refurbished unit from amazon to save some money. Another reason I decided to go this route is the large number of reviews people leave on most all truck GPS units about getting a defective model. The refurbished units carry the same warranty from amazon and have been repaired and tested prior to shipping. From my point of view you not only save money but lower your chances of having to immediately send it in for repair and being without for a few weeks.

This is not the GPS for you if you want anything to last over a year. The maps are outdated and the unit is slow. Free updates are free but useless. They dont update the map. Traffic and weather are not free and require a wifi connection.

I am sorry to report that due to your technical support personnel, specifically someone by the name of Mario, I will be seeking an alternative to Rand McNally. He was by far the rudest individual that I have ever encountered. He told me me something and I tried to mention that I knew how to fix that so he could continue. He told me to “Shut up, I am the technical support, not you. You obviously do not want my help.” I requested that he give me a second to configure the screen the way he wanted it. He stated that he had disconnected me and he hung up. As I stated. I will no longer be using Rand McNally. This is not an organization that I would willingly spend my money with.

So heaven help you if you have any issues with updating their software or their maps, because you are on your own to figure out why their software is not compatible with your computer.

I have owned several of the Rand McNally units. A few years ago they upgraded there 710 and 720 models. Most of the failures in the older models seem to be a power supply issue as the USB mini plug would get hot. The relocation of the plug from the side to the back of the unit didn’t seem to help much. Within less than a year a driver would have to call in for an exchange or repair leaving them without a GPS. I will say that the incorrect map data on these units falls on a company known as Navtech who sells all the map data to every GPS manufacture on the market. My opinion I would look into other units that have less failures than Rand McNally.

Ive had my 720 for several years and this gps has been dependable.I like the easy to read graphics and the constant zoom on my route.I bought the newest model the 740 im not totally sold on it.The numbers are alot smaller than the 720 and my route doesnt stay on zoom.The problem ive started having with the 720 is the power cords dont seem to last very long for some reason.

Thos GPS was recommended to be by another driver. I however bought the newer model than his.i had trouble right out of the gate. The device kept freezing, and wouldn’t take an update. Rand sent me a new one right away.(it was the wrong model, and quickly sent me the correct model.) I still have lots of trouble with this one. I have been using it for over 3 years now. I just dont want to purchase a new one,as this does get me to where I need to go. It freezes up all the time and consistantly throws an error code. Always when u need it the most it seems. There is no way to adapt the route settings for it to calculate the best route. I can set the settings to all roads but it still gives wacky routes. This gets 3 stars because it does get me where I have to go. I will never purchase rand McNally again.