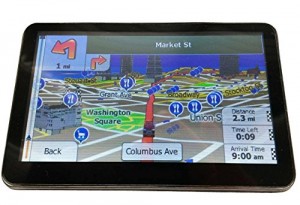 The TruckMate GPS 502 is a traditional GPS system optimized for the needs of truck drivers. Unlike other systems which are dependent on a constant internet connection to function, the TruckMate GPS 502 uses a system of stored offline maps in combination with GPS satellites to optimize a route. Combined with free lifetime maps, this makes the TruckMate GPS 502 a much less expensive option in both initial purchase price and operating costs when compared to live updating systems. However, this comes at the cost of not being able to account for changing conditions, as well as being unable to account for road changes between map updates.

The TruckMate GPS 502 is essentially a highly modified and specialized tablet computer, complete with mounting stand and in-cab charging system. The maps stored on the unit are gathered from databases provided publicly and relevant to trucks, enabling the system to be used to calculate routes which account for common hazards such as low bridges, bridge weight limits, and hazardous load restrictions. This provides the sort of core functionality that traditional “civilian” units don’t and ensures that drivers don’t find themselves needing to take unintended detours or otherwise find themselves in a place that their truck cannot fit.

Additionally, since the unit does not require a constant connection to the internet, it requires no data plan and does not cease functioning in areas where wireless internet is not available. This makes the TruckMate GPS 502 a particularly attractive option for those who tend to drive in remote or mountainous areas where a wireless signal is faint or inobtainable. This also enables the TruckMate GPS 502 to serve as a supplement to a pre-existing wireless internet system, such as an existing laptop, tablet or cell phone. The TruckMate GPS 502 is also not affected by adverse weather conditions or power outages due to its lack of reliance on external systems, making it an excellent backup unit for when others prove fallible or unreliable.

The TruckMate GPS 502 is also significantly less expensive than other comparable units. Because it is very simple and uses a lot of off-the-shelf technology, it costs between a third and a quarter of other units. Its simple design also means there is less to go wrong. It uses a standard micro USB plug for power, enabling it to be charged from some devices, as well as making it compatible with numerous accessories, portable batteries, and other options. The 5″ screen is large enough to be useful while small enough to be unobtrusive, and the 800 x 480-pixel resolution is sufficient for displaying maps accurately. It has both 2D and 3D map modes and has some information about local businesses, primarily those concerned with food, fuel, and rest, the most vital to a trucker.

However, since the TruckMate GPS 502 does not connect to the internet, it doesn’t have some of the features that many truckers may now see as “standard.” It is not capable of informing the driver of inclement weather, road closures, new construction, or other hazards. Likewise, it cannot inform the driver about upcoming rest stops, or anything else other than one’s current location and the mathematically fastest route to a given address. This makes the TruckMate GPS 502 somewhat inferior to even the GPS available on most smartphones, excepting its ability to function offline at all times.

The TruckMate GPS 502 is ideal for a trucker on a budget or one who is familiar with most of his route and does not require additional information about construction, stops and other hazards. Additionally, its ability to function without any wireless internet makes it a valuable asset in remote areas, during power outages, and in other adverse situations. This, combined with the low price, also makes the TruckMate GPS 502 an ideal backup or “second” for drivers who have had problems with internet-connected devices in the past. You can get a great deal on TruckMate 502 here.