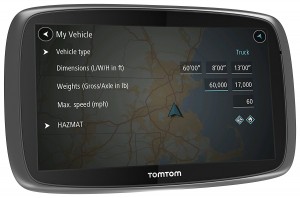 The TomTom Trucker 600 is a dashboard-mounted GPS system optimized for the needs of the trucking industry. Most notably, unlike a standard GPS, it includes and tracks critical information regarding road height, overpass height, and commercial carrying restrictions. This enables truckers to not only plan their route, but to do so without being unintentionally directed through areas where their vehicle is not allowed, does not fit, or which otherwise presents a suboptimal route for a large commercial vehicle.

This is primarily achieved by the TomTom’s custom software, which enables truckers to input the size and weight of their vehicle, along with the sort of cargo being carried, to have the Trucker 6000 automatically route them around potential problems. This includes everything from tunnels and low overpasses to residential neighborhoods where such vehicles are prohibited. There are also options to route around toll roads, as well as means of including certain refueling or check-in spots on the way.

The new TomTom also can connect via Bluetooth to a trucker’s phone, where the MyDrive app can be used to plan a route, avoid likely hazards and traffic, as well as transmit and confirm proposed routes to the customer or management. Additionally, the route can be programmed at a central office or at the driver’s point of departure, and then uploaded to the GPS wirelessly upon the start of the trip. This helps drivers to coordinate with their managers or customers in advance, enabling the driver’s status to be estimated or determined live without needing to bother the driver during the trip.

Additionally, the Trucker 600 comes with lifetime map and traffic updates included in the price. This ensures that the Trucker 600 is not only aware of changes in road layout or traffic patterns over time, but that it can re-route to more optimal routes in the event of adverse weather or accidents. This helps to eliminate much of the guesswork in route planning and also avoids getting lost due to road construction. As such, it is superior to traditional GPS options which require an SD card or other manual offline method of updating, or phone-based GPS apps which are not optimized to account for the sort of problems a truck driver is likely to be concerned about. 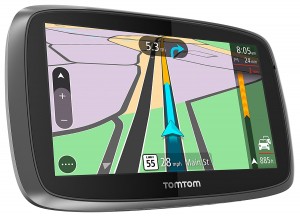 However, the Trucker 600 is not limited to being a solely commercial device, suitable only for truck drivers. The software architecture is based on the standard TomTom models, with the trucker options serving primarily as extra upgrades to the base system. This means that the GPS system is only a few screen taps away from being used in any vehicle, making it ideal for owner/operators who want to use it as a personal GPS, or RV owners who tow a smaller vehicle. Up to four vehicles can be stored in the device, enabling the device to quickly switch between stored vehicle types and plan optimal routes accordingly.

The Trucker has a simple snap-mount system, enabling it to be quickly and easily placed anywhere convenient. A basic mounting setup is provided with the system. The click-n-go setup is easy to install and provides a firm mounting point that will not jostle around or come loose over time. Additionally, as it is a standard that has been used for a long time, and numerous mount options are widely available on the market, making third party mounting options easy to find. The system has a 6″ touchscreen with variable brightness settings and automatic night dimming. The onboard battery will last up to two hours and can be recharged via a MicroUSB connection, although the system is better served by a permanent connection. A 10V DC cable is provided, and it is possible to hardwire the system, although it requires special cables. The 16GB of internal memory can be expanded by a MicroSD card slot, which accommodates up to 128GB of storage.

Overall the new TomTom offers considerable advantages over standard GPS systems and smartphone-based GPS software. Primarily this is centered around the device’s ability to know and understand typical road hazards relevant to truckers, i.e. height and load restrictions. This helps drivers avoid the most common problems caused by standard GPS units, most notably the unintentional routing of trucks down roads too small, narrow, or with insufficient clearance for a large vehicle. The fact that the system does not have any sort of built-in Wi-Fi connection and is dependent on the user’s phone and an app is inconvenient, but the fact that the software can be programmed using a phone or desktop computer and then updated instantly so long as the device is connected to a phone is certainly convenient. This makes the TomTom Trucker an excellent option for those who need a truck gps system. You can get a great deal on TomTom Trucker 600 here.

This unit was a disappointment. If you want to use traffic updates, you have to connect it to your cellphone. I guess that’s because traffic info from the internet is more accurate but it’s a lot of hassle to keep both devices synced up.

This GPS is not very good at find routes for trucks, it directs me on roads where trucks are not allowed. The screen is very bright, very good graphics, voice is well done, it’s the truck-specific features that need improvement.

lousy gps nothing related to trucks ie scales, truck stops graphics are terrible. I have a 5 yr old garmin that hasnt been updated that works a hundred times better. i am returning this crap

I purchased this a few days ago. I’ve had my Garmin for 5+ YEARS. It finally crapped out.
TomTom is horrible! Every route it tries putting me on non truck routes. Twice it couldn’t even get the address correct.
Total garbage! Returning it as soon as I get back to a Loves!

It has to be the biggest peace of crap out there. I am definitely taking this junk back. 4 times it has sent me down routes with low bridges.

A big disappointment. Fuel stops are all car related. Not easy. No better than a basic car gps.i am a reasonably experienced driver so know most of my routes.
A novice who bought this would really struggle

Please ignore above comments. The gps is very good.

You need to give it time. Not all the info is obvious hence my incorrect comments. All the trucks stops & rest areas are available. Check “my places” not gas stations.

Stay away from it!!!!! This is probably the worst GPS ever created. If you rely on GPS alone and are not vigilant, you will most likely get into an accident. Several times, that GPS took me to low bridge areas. Moreover, it took me to rivers, dead-ends and bridges as my destinations. The posted speed limit is not accurate a lot of times. Thank God it shut off completely after three (3) months of usage. If there were penal laws for bad GPS, this one would probably be on death row. Lol. Just kidding a bit!!!!

absolute rubbish, it will continually take you down routes not suitable for a truck. can not be trusted, the very thing i bought it for.

Purchased a while back. I have been trying to figure this thing out from day one. I like the fact you can add stops to the route because I do multi drop loads. I do like the fact it shows the different chains of truck stops under the my places section. I don’t like the fact that even after you set it up for height and weight it still will not keep you off of non truck routes, or off weight restricted bridges, or away from low clearances. I used the regular tomtom for cars before I purchased this one. The only difference between the two is this one shows rest areas and toll gates that are coming up and also shows the big chain truck stops in the my places tab. Other than that and the truck spec screen which is limited to standard trucks with general freight there is not a difference between the standard car GPS and this one. If I had known before hand I wouldn’t have waisted my money. Also chatted online with support and they told me it was my job to look up and avoid any restiction or low clearances for the truck I’m driving. Which I do anyway. I bought this one because of my fondness to the standard car GPS but I will now say that this GPS is a total disappointment and this is coming from a longtime loyal tomtom customer. Don’t waist your money on this when you can buy the same thing in the car GPS for a hundred bucks if not cheaper.

Still within the first month with it.
It won’t hold the charging connection.
Big FAIL TomTom.
I don’t give a damn about “extra” features.
If it won’t stay on, it isn’t worth sh*t.

I was using smart truck II on my phone. Worked good, never sent me into a bridge or restricted road just bad graphics and didn’t like using all my data. Had a randmcnally but it would constantly freeze up and eventually died. Thought I would try this TomTom out since I’ve had Garmin before and this was alot cheaper. This TomTom is a big piece of shit. If you have ever driven In N.Y. state you can’t go on any parkway with any commercial vehicle ever. Constantly puts you on them especially In Long Island. Heading to D.C. now and because traffic on 95/495 suck as usual it try sending me to Baltimore Washington prky(295) off of 695. Trucks can only go down this for 8 mile before must exit. But this piece of crap tells you to keep going. Tech support is pointless. If you pass an exit for whatever reason it takes almost 2 minutes to recalculate. Total crap

STAY AWAY FROM THIS JUNK. Total POS. From day one, took me down non-truck roads, and if I followed it 100%, I would have crashed my truck or ended up going around in circles. Maps are nowhere near accurate, and I ended up using it, while it worked, for traffic updates and little else. My Drive Connect software continually crashes, device now has a corrupted map (thanks to trying to update it) and after three tries and uncounted recovery from the My Drive Connect crashes, it STILL won’t restore, and now I GIVE UP. The TomTom website is USELESS, and support is non-existent. Good luck ever getting an actual person to talk to. THEY SUCK. First and LAST TomTom Truck nav I will ever buy.

I agree it is a POS. never able to sync to my phone for updates. Telephone support was an absolute joke as well. As a long time Tom Tom supporter and user in the past I will never ever waste my money on Tom Tom again. They have ripped me off for the last time

This GPS does not show where the scales are, No low bridge clearance warnings it also shows where the gas stations are whoch is useless and it only shows 1/4 of where all the truck stops are also no Mom and Pop truck stops are avail. I use TT Trucker Tools to find scales or a emergency Truck stop on my phone in case I need to stop because this GPS feature sucks.