ONE20 Truck Driver GPS has an average rating of 3 out of 5 based on 4 user reviews. 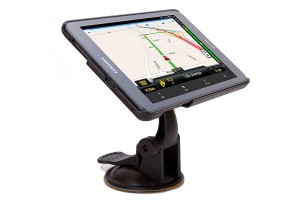 The ONE20 is more than a GPS. It is intended to be a truck driver’s companion, in the form of a solid and reliable Samsung tablet. Powered by the AT&T network, the ONE20 software optimizes routes, alerts the driver to hazardous weather conditions, and keeps the driver abreast of current prices for fuel, food, and hotels along the trip. The objective of the ONE20 is to enable truck drivers to have the information they need to make smart choices. Armed with such information, they can choose better routes, save money on the trip, and otherwise optimize the

The ONE20 is built around the Samsung Tab E, which was chosen for its longevity, reliability and its use of the Android operating system. While it is possible to download and run the ONE20 app on any Android device, the Samsung Tab E that is provided is optimal, with sufficient RAM and processing power to run the device at top speed. Additionally, a suction cup mount system is provided, and the optional 10GB/mo data plan is more than sufficient to download all of the road data the ONE20 requires. However, the fact that the ONE20 software can run on any Android device means that a driver can carry the data over to his phone, other tablets, and whatever other device is most convenient.

The biggest advantage of the ONE20 system is that it has access to a large number of databases of information and that it feeds that information to the driver in real time. While even the most modest GPS is now able to account for basic traffic congestion and weather condition issues, the ONE20 is able to account for, after programming, issues such as hazardous road restrictions, bridge load limits, and low bridge warnings. These sorts of issues are the most common encountered by truck drivers, whose vehicles are subject to more restrictions than private cars. This helps drivers to avoid problems that can get them stuck, force them to take detours or side streets they did not plan, or otherwise waste time and money on inconvenience.

However, warnings about bridge height, road conditions, and bridge capacity are usually widely posted, and even drivers unfamiliar with a particular area can usually avoid a low bridge or area closed to certain kinds of cargo. Where the ONE20 stands out is the fact that it tracks deals and discounts specifically relevant to truckers, from hotel rates to the price of food and fuel. Drivers can pre-plan their route to stop at optimally priced locations for different resources, and even pre-purchase certain items through integrated apps and bill them to appropriate corporate accounts and credit cards. This saves time and hassle and eliminates the need to carry cash or cards that can be lost or stolen.

Additionally, the Samsung Tab E is not hobbled in any way and retains its core functionality. Apps for Facebook, Twitter and other forms of social media are readily available, enabling truckers to keep in touch with friends and family as they travel. Services like Skype and Gmail enable truckers to keep in touch with home base and keep abreast of any changes, and the ability to stream Netflix, Hulu, YouTube, and other services increases the functionality of the tablet outside of its core function as a GPS and travel planner. When paired with a keyboard, the tablet can effectively become a mobile office in and of itself, enabling truckers to fill out any necessary digital paperwork at stops.

The best feature of the ONE20 software, though, is that truckers can report and flag important information within the app itself as they travel. Truckers know their industry best and can include important information about prices, hazards, and approaching problems. Everything from upcoming weigh stations to police speed traps can be noted and flagged, along with comments and explanations. Additionally, subsequent truckers can flag information as inaccurate, and all information is removed as it becomes irrelevant over time. This helps keep false or outdated information from accumulating, as well as ensuring the system is self-correcting.

However, some users complain at the fact that the core system is built around a Samsung Tab E. While it is possible to install the software on any device, it is optimized for the Samsung Tab E, which is considerably more expensive than other models. Additionally, since the software can be installed on any Android product, and an Apple version has recently been released, many users question the purchase of an expensive tablet that will grow obsolete within a few years. This is especially the case in light of the fact that the app can be run on most smartphones, negating the need for the purchase of a specific tablet entirely. Lastly, since much of the system’s capabilities are dependent on truckers volunteering the information as they drive, areas which are not routinely transited by truckers using the system tend to be lacking in any information outside of what is readily available on Google or other search engines.

The ONE20 is superior to traditional GPS systems since it enables the import of a large amount of data, including crowdsourced data from other truckers. However, some criticize the fact that ONE20 is offering their service via an expensive tablet when it also runs just fine on much less expensive phones and devices, seeing this as an unnecessary expense. This is somewhat justified by the software being optimized for the tablet, and by the fact that ONE20 is not asking for significantly more than the tablet’s retail price, while also including mounting gear and other accessories to optimize usage. In the end, the choice to use the ONE20 system is up to individual drivers, but most will value the ability to get and send truck-relevant information and deals on a single device that can also perform additional tasks if needed.

You can get a great deal on ONE20 Truck Driver GPS here.

Don’t even bother with this one. You can only use it if buy a mobile plan that doesn’t roaming charges.

Uses Copilot truck gps which can be downloaded on your phone.

If you already subscribe to Verizon and have an unlimited data plan, the ONE20 is an excellent truck GPS, using the proven CoPilot base maps and interface. Alternate routing is provided in one click, hazmat categories and routing works perfectly, and you have the ability to alter routing by dragging your route to alternate roadways. I use it in conjunction with my Rand McNally TD 730, and find it to be just as accurate. Features that I like include customizable road – type preferences and typical speeds, which make for extremely accurate ETAs. Via points can be set to customize routing, while not effecting ETA calculation to designated stops, which is quite useful.

Easy to use, no monthly subscription, great tech support and free perks.

We ordered the One20 before it was certified through FMCSA and have been very unhappy with it. It does not work for co drivers or AG exempt. We both have our own phones and when I log off and the co driver logs in, we get unidentified driving on both our logs. We get this all the time even when we are logged in and driving. It also gives us system malfunction, use paper logs all the time. The GPS doesn’t know where you are. The AG exempt reports unidentified driving. Personal conveyance registers unidentified driving. We have spent hrs on the phone and writing emails to One20 but the problem is still not fixed. We have been keeping paper logs for the last 5 months because One20 does not work. We ordered a different ELD from GEO Space Labs. It uses 750mb-1gb every day. So if you have unlimited data, be careful!

Reviewer Dale is talking about One20 ELD rather than One20 Maps GPS. These two are not the same thing. I found the One20 Maps GPS app to be very useful. Im sad to see it go